Ryker is officially 1 month old now, and that’s about how long it’s taken me to get used to this new mom life thing and finally have some energy again! The sleep deprivation is no joke. Last night, he had his best sleep to date so I’m feeling alive again and ready to write this post! So here’s how it went down:

(Update, he woke up as soon as I wrote that paragraph, and it’s taken me the next 5 days to complete this post – one paragraph at a time, haha)

September 6th, I went for a very long walk with my dog in hopes of getting things moving. I had been doing walks but on this one, I pushed my self. It was hot out, and there were hills…lots of sweating. Once I got home and rested a bit, I started feeling funny. I immediately questioned, “Is this labor?” I had period like, dull cramps for the rest of the day. I tried to time them wondering if they were contractions, but I couldn’t because they didn’t really have a clear beginning or end. Everyone I talked to and everything I researched said they would have an overall “peak” and then a release. But this wasn’t that. It was more just like a dull cramp sensation the entire day. It was so uncomfortable, but I remember feeling excited because baby was close! My excitement turned to disappointment however, because everything I had been feeling went away that evening and I chalked it up to false labor and went to bed.

The next day, Sept 7th around 10am, I walked down to the store to grab some dates. My sister in law said they helped her go into labor so it was worth a shot. I don’t know what it is about dates, but they triggered something! I downed about 10 of them and decided to walk. I couldn’t just sit and wait, but I didn’t want to walk outside because it was hot. Also, at 9 months pregnant, it’s almost impossible to go somewhere and not have a stranger stop and ask you a question about your belly. So I walked from one end of the house to the other for about 2 hours and timed the contractions. They started out pretty dull. I’d say they were uncomfortable, but not painful. It was still hard to tell when they started and stopped, but gradually they got more intense and more defined. By around 12pm, they were 2.5 min apart so I called my husband to come home, we packed our stuff and drove to the hospital. The drive took about 30 min and the contractions really started to get more painful on the way there.

When we got there, I was only 2.5 cm dilated. The hospital requires a 4 to be admitted so we were turned away and told to come back. I was a little discouraged, but it worked out because neither of us had lunch yet and I wasn’t really in the mood for hospital food. We went to Chipotle. It was pretty awkward, because I couldn’t exactly hide that I was having painful contractions. One lady from across the room was timing them (unbeknownst to me) and eventually came up to us and suggested we get to the hospital because my contractions were 2 min apart. Haha!

We ate our food and did our best to kill two hours. I did my makeup in the car in between contractions which was actually a great distraction. We walked laps outside the hospital for the second hour, and by this point they were extremely painful. The closest feeling I can think of to describe them is like having the stomach flu, or being on the verge of extreme diarrhea. Fun.

After 2 hours, we checked back into the hospital. I was only at a 3!!!! Ugh. But luckily, the doctor decided to let me stay in the hospital and observe me for an hour to see if I could progress to a 4. Thank God, I did and we were admitted! It was around 4:30pm.

Around 5 or 6pm (not sure), I was still at a 4 and I was given the epidural. I will never not get an epidural. That shiz was amazeballs! I heard so many horror stories about the epidural not working correctly, but boy, did mine WORK. Pretty much instantly, I was numb, and stopped feeling any and all pain for the remainder of my labor and delivery. The downside was that it slowed my contractions so much, they almost stopped completely. Throughout the rest of the night, I was given pitocin to help get things progressing again, but I was stuck at 5cm the entire night and into the morning.

Everything was lining up for me to have the perfect labor, but Ryker’s heart rate dropped several times and it was very scary. It happened a total of 4 times. The first time was right after I was given the epidural. The nurses explained that it sometimes happens because the babies are not used to the medicine in your system. They made it sound like it was common, and his heart rate picked right back up so I didn’t think very much of it. The second time was early in the morning. I didn’t even know anything had happened, but a nurse came in and explained to me that his heart rate had dropped again for several minutes. She said when that happens, the baby isn’t getting enough oxygen and it’s basically like he’s holding his breath. She said she didn’t want to scare me, but if it happened again, I would need an emergency C section. As much as she didn’t want to scare me, it freaked me the eff out. From then on, my eyes were glued to the monitors.

A couple hours later, the night staff switched to daytime. Just as that transition happened, I saw on the monitor that his heart rate dropped for the third time and it wasn’t picking back up. No one was coming into the room (probably because the staff had just switched), so Travis ran out to get help. I was frantic. They tried rolling me over to my other side but it was so hard because I was completely numb and couldn’t move. All the while, the nurse was calling for assistance. Soon, a bunch of nurses and the doctor came flooding in and it felt like chaos. I started hyperventilating and crying. The nurse gave me an oxygen mask to breath from. I couldn’t stop staring at the monitor as his heart rate kept dropping and thinking about what the previous nurse told me. I honestly thought my baby was dying inside me and I needed a C section. But, I was eventually able to turn over to my side, and his heart rate picked back up. The doctor checked me again for dilation and I had jumped to a 10. I was only at a 5 and hour prior! If I had still been stuck at a 5, I have no doubt I would be heading to the operating room for a C section.

I thought because I was at a 10, I would be able to start pushing, but the doctor wanted to wait an hour in order to not stress out the baby, and to make sure his heart rate stabilized. Fortunately, the hour passed and his heart rate was good so it was time to push. After one or two pushes, his heart rate fell AGAIN for the fourth time. My heart sank and the emotions from before came rushing back. I thought FOR SURE I would be heading to the OR. The nurse called in the doctor and the neonatal team. The doctor checked to see how low the baby was and decided I could continue pushing, but we needed to speed things up…In order to do this, I would have to have an assisted delivery via vacuum.

The prospect of having a vacuum delivery had never crossed my mind before. They never covered it in the labor classes, and I had never even thought to research it.  But, there was no time for objection and I knew I didn’t want a C-section. Honestly, I’m kind of glad I didn’t know anything about it, because I did some googling afterwards and there are some scary complications if things go wrong…If you don’t know what a vacuum delivery is, it’s probably how you might imagine. Theres a suction cup that they adhere to the baby’s head and a chord leading out for the doctor to pull on. The suction cup can sometimes pop off, so my doctor told me she would give it three tries and after that, I would be headed for a C section.

With a vacuum delivery, you still have to push. I was determined to get that baby out quickly, so I gave it everything I had. Sometimes with an epidural, the loss of sensation can make pushing ineffective, but fortunately for me, I was still in touch with my muscles and I could feel my progress based on the pressure. After about 4 -6 big pushes, he came out! Pushing only last about 10-15 minutes. I was so relieved to have him out! I cried all the happy tears! I was able to hold him briefly, but he had aspirated some meconium, (baby poop) inside the womb, so the doctors had to take him away to clear his airways. From there, he had no other complications and we were able to have skin to skin time.

I will be completely honest and say I didn’t have an instant connection as soon as he came out. I don’t know if it was the shock of what I just went through, but he was a stranger to me at first. Or maybe, the idea that I just created a brand new human was a lot for my brain to comprehend. It wasn’t until we were packing up and heading home that it really, really hit me. From then on, my love for him only grows and grows! Travis hates when I compare babies to dogs, but the best comparison I can make is when you get a new dog/puppy (or any pet for that matter), and you’re so excited about it, but you don’t know their personality yet. As you start to learn their personality, tendencies, and quirks, it only makes you love them more. That’s how I feel about Ryker. I love him more with every day, because every day I am learning more about him and watching him grow. It truly is the best experience and I am eternally grateful for this gift! 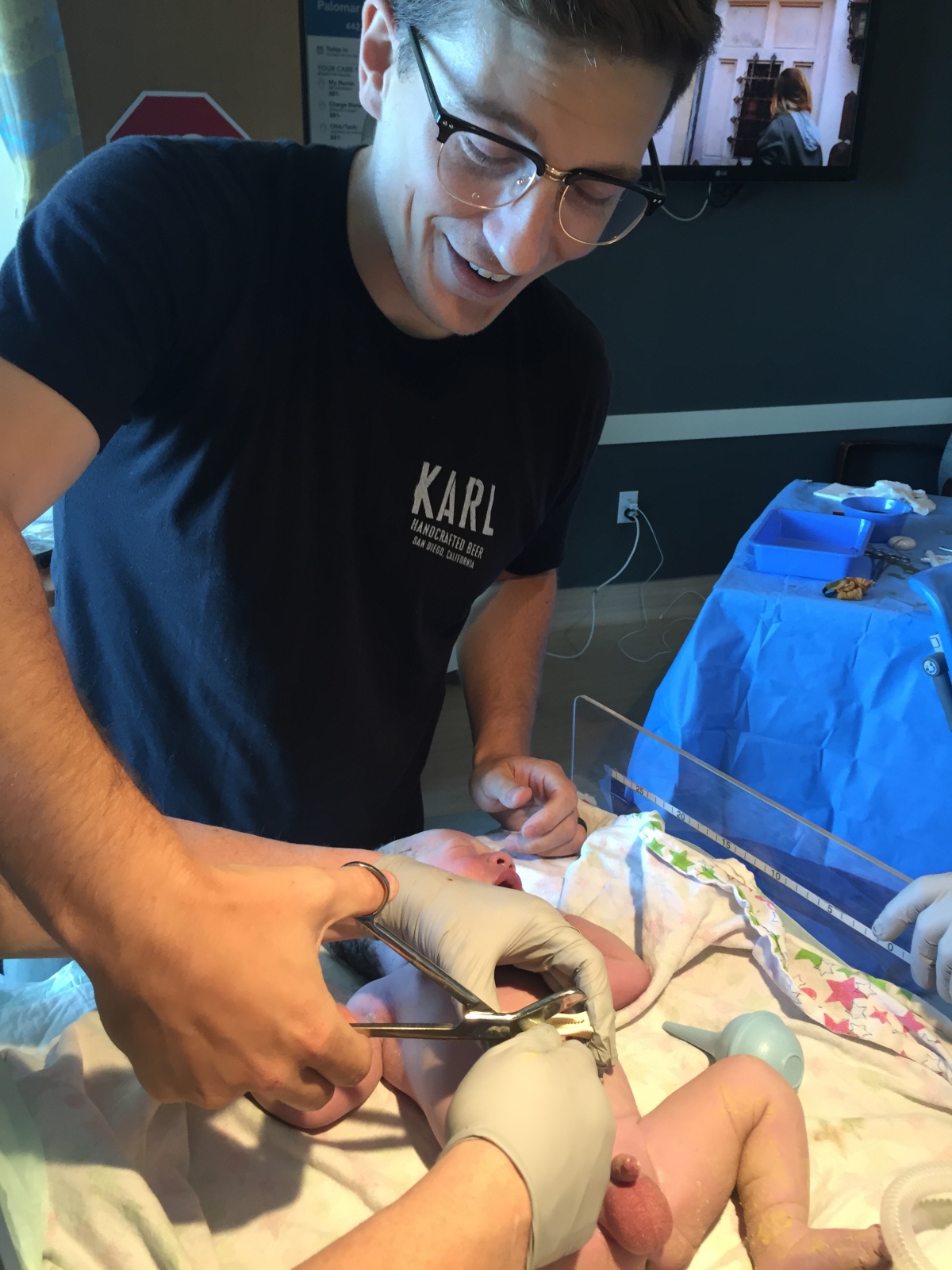 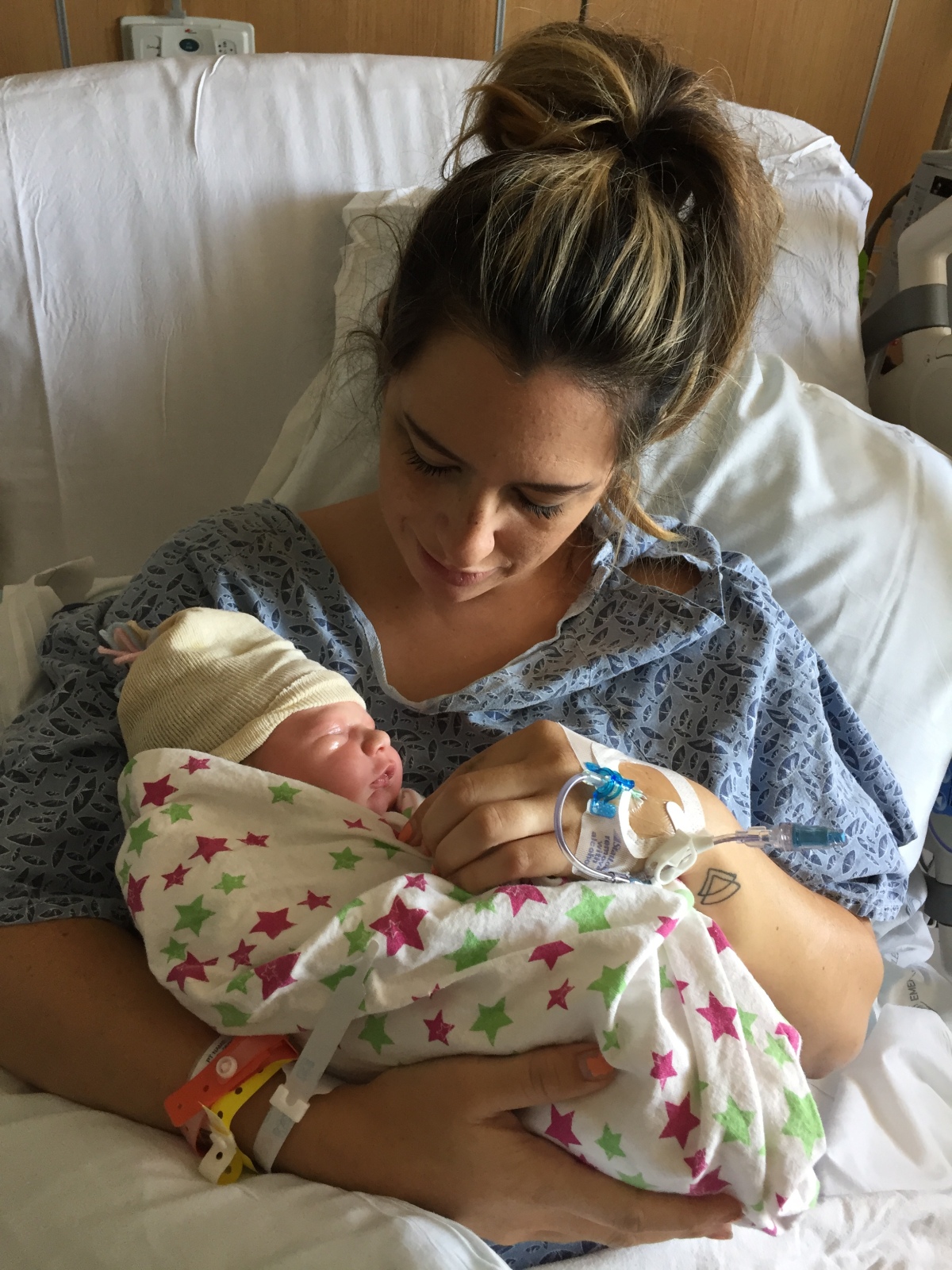 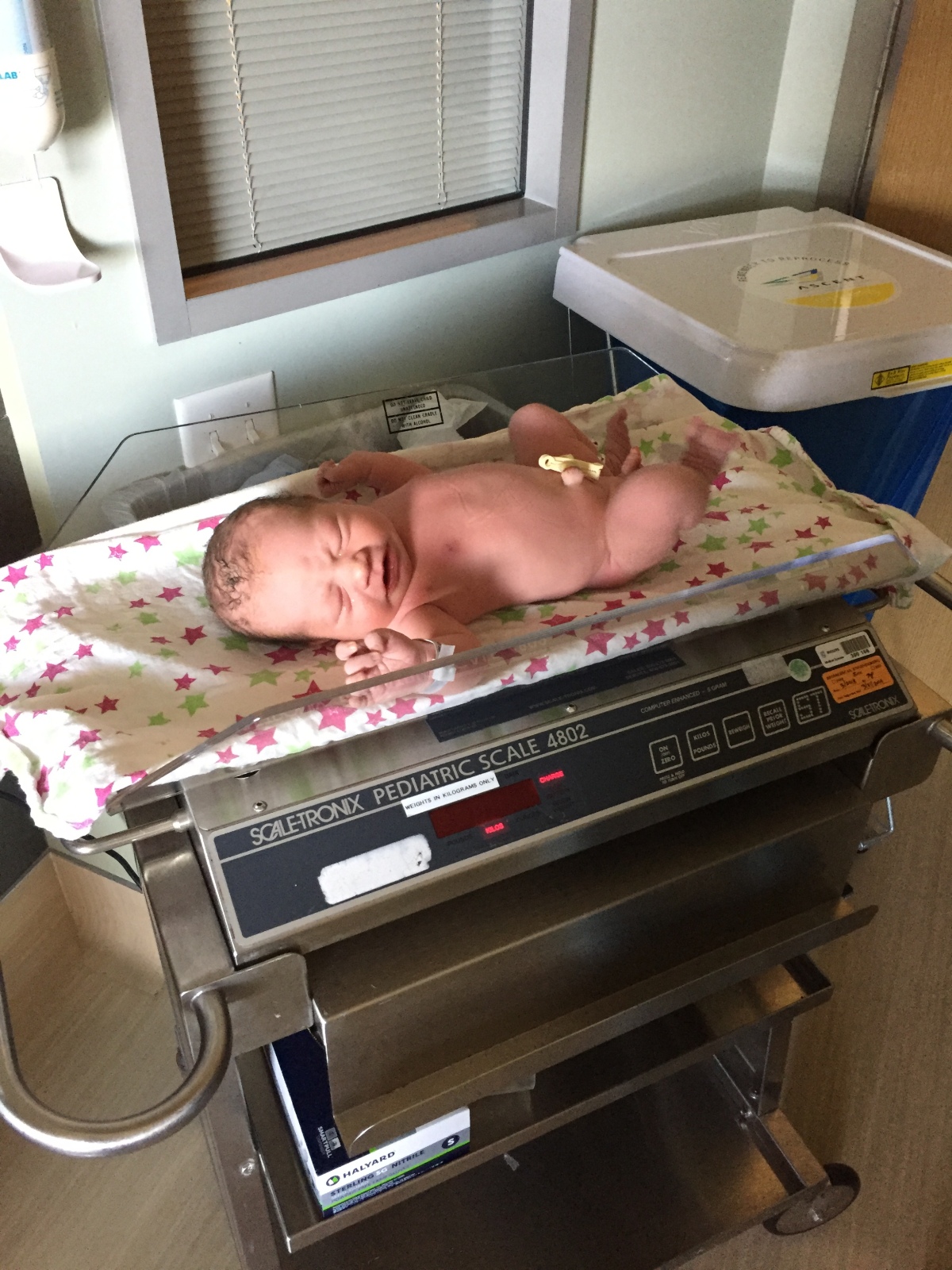 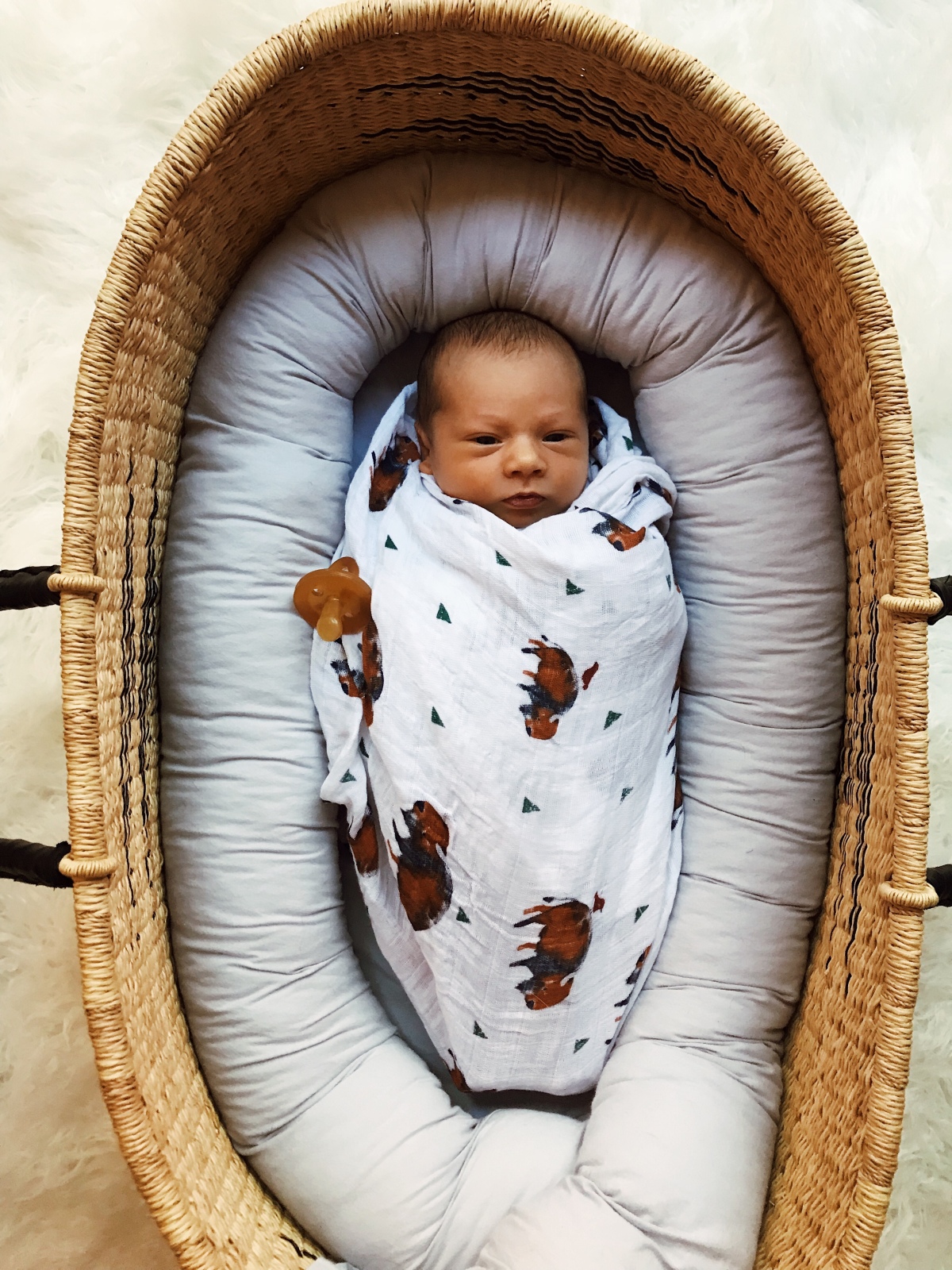